SteamPunk for the young at heart

A DVD review for those little SteamPunkers out there, and those who are still young at heart. 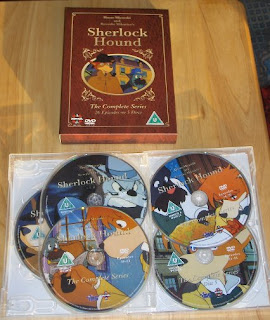 Following a second viewing of all 26 episodes that rekindled my delight with this childrens' animated TV series from 1984 Japan.

The charming characters are depicted as anthropomorphic dogs, save Sherlock Hound who is Fox-like, and Professor Moriarty who is most definitely a Wolf. Being Japanese animation (know as Anime) this series also has a pedigree of one the finest Animators and animation directors the world has ever known 'Hayao Miyazaki' who had full control over the following episodes:


There are umpteen examples of turn of the Century vehicles, ranging form early motorcars to roadsters, blimps to airships to biplanes, steam locomotives, traction engines, and dreadnoughts, but this is the age of invention, and in the series Sherlock Hound's nemesis is Professor Moriarty a thief and an inventor of marvels that convey him and his henchmen, in the air, on land and above and beneath the sea.
These ingenious SteamPunk vehicles are mostly coloured in bright pink. I would speculate that this could have been to catch young childrens' attention, but I like to think it is that this garish colour 'Pink' that was considered by the Victorian's to be only suitable for men (that' right Boys had pink and Girls had blue, in that era) shocking that it was, and would be another way Professor Moriarty would be able to terrorize polite and genteel Victorian society.

It was good to see many seances at his residence depicting Sherlock using chemistry to aid his deductions, and the occasional violin playing too! Foggy London also featured in episodes, but I found the change of atmosphere to the countryside of just one episode to a bleak industrial town called 'Gillmore's valley', with its ankle-deep muddy roads and Armaments factories with the wealthy owner's large house over looking the town from the hill-top. The workers children being given medical attention by Dr. Watson, add to that, that the Factories owner's son is more concerned with the health and welfare of the workers and their families than inheriting his father's fortune. ( in the 11th. Episode 'The Enormous Saving Box' ( Eng. title The Sovereign Gold Coins ).

In episode 21 'Singing! Growing Mechanic Maneuvers' ( Eng. title The Disappearance of the Splendid Royal Horse ) has the introduction of a Arthur J. Raffles like thief in London, and puts Moriarty in disgrace. With flash-backs done as sketches in sepia, a delightful and charming tale.

I found episode 22 'The Chaotic Large Airplane Race' ( Eng. title Disturbance, The World Flight Championship! ), so reminded me of the 1965 film 'Those Magnificent Men in Their Flying Machines' Terry-Thomas could have easily been Moriarty intending to sabotage his way to first place in this esteemed airplane race, of a story.

In 'The London Sky Battle' ( Eng. title The Rosetta Stone ) episode 19 set in the British Museum when the Rosetta Stone is levitated away by a theft, many countries' who lay claim to the stone are under suspicion. It pokes fun at British Imperialism and how many nations' treasures are in British museums.
I will leave you with episode 1 'His Name: Detective of Rumor' ( Eng. title The Four Signatures ) in which Sherlock is a passenger on a ship that is attacked by Pirates, and with the aid of a fellow passenger a Dr. John Watson tries to foil their plans. What more could a child ask for!
Posted by The Steam Brigadier at 08:21 1 comment: