Posted by The Steam Brigadier at 11:56 No comments:

For those of you who are familiar with, and crave more of, the adventures of the dashing young cavalry officer Athelstane King and his man Ranjit of the Peshawar Lancers, - look no farther than the novella Shikari in Galveston by S.M. Stirling, featured in Worlds That Weren't (Published by RoC 2002. ISBN 0451458869).

The coal smoke of the Empire's industrialized towns and cities, with their heaving throngs of people, is left far behind for the swamps and dense woodlands and jungles of Texas. A place full of diverting possibilities for our young hero's derring-do.

The locals are good clean folk, etching out a fledgeling civilization from this frontier land in the aftermath of their ancestors. They are noting the use of vulcanized rubber, binoculars, the latest rifles, Steamships and other modern marvels of the Empire.

On leave from his duties in India, King is free to hunt for big game, Man-eaters have been reported and he hopes to bag some trophies. Athelstane's character is one which suffers no fools, believes in fair play and sportsmanship and, as a representative of the British Empire, comports himself impeccably, - winning-over the natives with his innate confidence and charm.

The novella is set in the post Steampunk world and does not disappoint with its turn of events. The author's confessional at the end serves to re-enforce one's fervour for this genre, and the love of adventure.

A darn good yarn of the highest order !

Posted by The Steam Brigadier at 11:34 No comments:

A little jaunt to a Steampunk chapel. Pt. 1 of 3 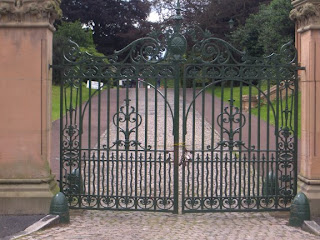 You've heard the saying “Half the fun is getting there!” - so it was loads of fun finding this little island of Victorian craftsmanship! Hidden from the main road and shrouded by farm and woodland, it is not far from the village of Papplewick which lies somewhere between Mansfield and the city of Nottingham. To find it you need your wits about you and a good navigator like my 14-year-old son Thomas who also thoroughly enjoyed our visit.

The main wrought-iron gates and path beyond give one the impression of a formal landscaped English garden. Entering the grounds through the Gate House, on your left is an ornamental pond of some length with a centre fountain, - not simply for show this was the Cooling Pond. For the young engineers among us, the cold water was sucked into the Engine House, condensed the steam, warm water then fed back into the pond. The fountain also had a more practical function, used to replenish the pond's water, maintaining the correct level.

Posted by The Steam Brigadier at 05:26 No comments:

A little jaunt to a Steampunk chapel. Pt. 2 of 3 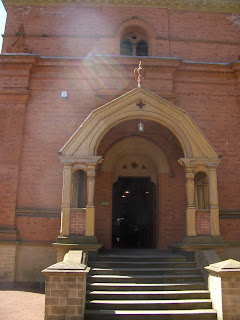 The Engine House, which I refer to as a 'Steampunk Chapel' stands out from the countryside panorama with its terracotta brickwork and slate roof, - you can even make out its many arched windows.

Posted by The Steam Brigadier at 05:18 No comments:

A little jaunt to a Steampunk chapel. Pt. 3 of 3 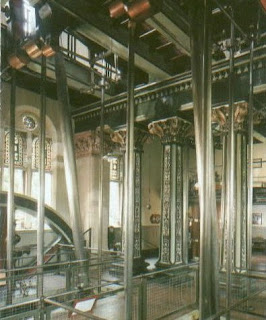 Once inside, your gaze is first drawn to the large steel flywheels and then to the ornately decorated columns. The latter's job is to support the see-saw motion of the beam engines. One is struck by the brightness of the interior and look up at the stained glass windows, each depicting some form of nature emphasizing that water is the life blood for all.

I could only marvel at the Engineering and the Architecture with the loving thought that this place of such toil and labour was, and still is, of such beauty.

Papplewick Pumping Station is well worth finding and visiting as my few words can hardly do it justice.

Welcome to the Learning Zone for Papplewick Pumping Station

Posted by The Steam Brigadier at 02:31 No comments:

'The Science Fiction of Edgar Allen Poe', Harold Beaver (Editor)
Paperback, Published: December 1976, by Penguin UK.
ISBN-13: 9780140431063, ISBN-10: 0140431063.
16 short stories:- MS. Found in a Bottle; The Unparelleled Adventure of One Hans Pfaall; The Conversation of Eiros and Charmion; A Descent into the Maelstom; The Colloquy of Monos and Una; A Tale of the Ragged Mountains; The Balloon-Hoax; Mesmeric Revelation; The Thousand-and-Second Tale of Scherazade; Some Words with a Mummy; The Power of Words; The System of Dr. Tarr and Prof. Fether; The Facts in the Case of M. Valdemar; Eureka: An Essay on the Material and Spiritual Universe; Mellonta Tauta; Von Kempelen and His Discovery.

My enjoyment in discovering this little book and its collection of 16 short stories, even its very existence was enough for me to try and track it down, and find out more about the works of the Founder of Science Fiction.

Each of the tales has extensive notes, and an individual critique by the Editor, which only enhances the collection, and helps draw you in to the imagination of the Victorians.

A World with its details and its querks, its Amateur Scientist, and Hobby Mathematicians exploring the very Nature of the World – Physical and Spiritual and of the unknown...

I wholeheartedly recommend that you read the splendid story entitled “The Thousand-and-Second Tale of Scheherazade”, as well as the lurid tale of “Some Words with a Mummy”, and beautifully crafted tale of “The Balloon-Hoax”, and the equally inspirational short story entitled “The Unparelleled Adventure of One Hans Pfaall”.

Poe's work as a Science Fiction writer is largely overlooked, but once you the reader have succumbedto his influences, His rightful place in the Literary “Valhalla” will be assured.

I IMPLORE YOU, - SEEK OUT THIS BOOK!

Posted by The Steam Brigadier at 16:07 No comments:

Realms that are “SteamPunk”

To immerse yourself in the Realms that are “SteamPunk”

The first step is: to imagine that you are back in the Victorian age of Invention, Adventure and Discovery, the days of the might of the British Empire, its Industrialisation spreading engineering marvels through out the World.
Iron and Rivets were used to make bridges and towers of wonder, Steam Engines power the factory's machines, the Railways with their Steam Locomotives conveying people and goods at great speeds, Steam Engines power Ocean going ships of enormous size, by “paddle wheel”, “screw”, and “propeller”.

The French pioneers made it possible for Adventurers to travel the air-ways in hot air balloons, and small Blimps. Later, the rise of German technology would see the Airships come of age.
The harnessing and understanding of the wonders of Electricity; the Telegraph, using Morse Code sending a Telegram down a copper wire, at unheard of speeds, heralding a new age of communication.

These are just a few images for your imagination to take hold of.

The second step is: to take on the outlook of the Authors of Speculative Fiction (Scientific Romance), the forerunners of today's Science Fiction writers, in looking forward from the Victorian age, and making the improbable possible!

All manner of Neo Victorian conveyances abound: Giant flying machines that are heavier than air; Ships that travel beneath the waves; Cannons now propel projectiles with Adventurers inside, to moons and other planets; Machines tunnel under foot, and much deeper; Other off worldly machines made for war stride over rooftops with ease; mechanical men and strange automaton like animals are commanded; to be able to travel to any-when, not just anywhere; even an individual can travel via their own one wheeled conveyance!

Imagine the effects of science on the animal kingdom, and our own human bodies: reanimated body parts; men of hideous strength; Animals walking upright on two legs instead of four; men who's bodies turn translucent; domestic animals bred so large, (so that they can feed the World)!

The Third step is: fictional alternate histories, the worlds of “what ifs” leading to a sideways take on past events, pushing ahead to new futures, not all of them turning out to be Utopias!
What if? Computers were mechanical, and the Information age had arrived in 1840's ! What future would see the “Great War” take place? What if we transpose our modern ideas onto a Victorian society? What Worlds would stand-in for our own?

Now to reach the “Punk” that is “Steampunk” turn back on yourself and Imagine a dystopian World of Coal mines, endless factories with smoking chimneys and foggy cities, men being enslaved to machines, so that others in that society can live the high life, oppressive tyrannical Empires holding the populous in their grasp. Now you have the Worlds of the haves and the have nots, the Gentleman and the street Urchin if you will.
Posted by The Steam Brigadier at 10:49 1 comment: